Is There Any Other Treatment For Knee Arthritis Prior To Knee Replacement (TKA)? Part I

Is There Any Other Treatment For Knee Arthritis Prior To Knee Replacement (TKA)? Part I
Posted on: 07 November, 2018

Obesity, genetic predisposition, prior knee surgery, and abnormal alignment of the lower extremity are common causes for knee arthritis. The “Conservative treatment of arthritis of the knee” is discussed in an article in the Journal of Orthopedics published in October of 2018 by Dr. Bert and his co-authors from the University of Vermont and Fort Belvoir, Virginia (see below).

Weight loss has been shown to reduce the incidence of OA by up to 90% in several studies, however this must be achieved through dietary control which unfortunately carries a failure rate of over 92%. Oral nonsteroidal anti-inflammatories (NSAIDs) are the first line of treatment for OA consisting of drugs such as Ibuprofen, Motrin, Alleve, and/or Naprosyn. Unfortunately, there is a high incidence of gastrointestinal complications reported to be as high as 18 to 22% with NSAIDs. Thus, steroid (cortisone) injections are commonly recommended in these patients. However, at least 2 studies confirm that they should not be performed more often than every 3 months to avoid damage to surface cartilage in the knee joint.

Unfortunately, the “residence time” is a short as 16 to 18 days with steroid injections i.e. the amount of time the steroid is still present in the joint. A newer long lasting injectable steroid, Zilretta, was released after FDA approval exactly 1 year ago and published studies confirm that it remains in the joint, to some degree, up to at least 12 weeks after injection. Zilretta is the preferred injectable treatment for patients with diabetes since the patient’s blood glucose level remains low subsequent to injection.

My next blog will discuss other injectables including hyaluronic acid, platelet rich plasma, and stem cells and the success rates with each type of treatment. 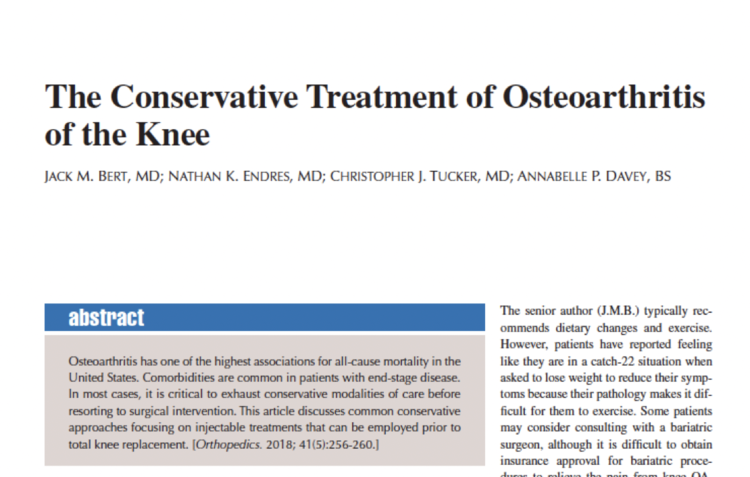